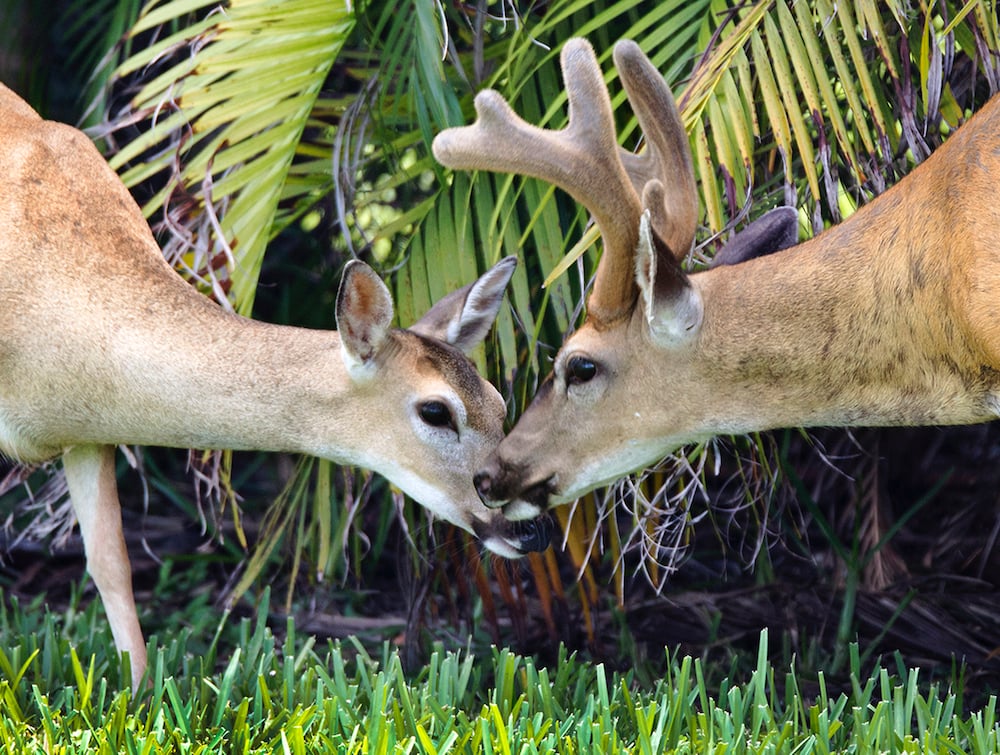 
The Florida Keys are temporarily closed to visitors because of coronavirus concerns, but one group of “residents” — the Lower Keys’ population of tiny, engaging Key deer — continues to lead lives untroubled and unchanged by the global crisis. 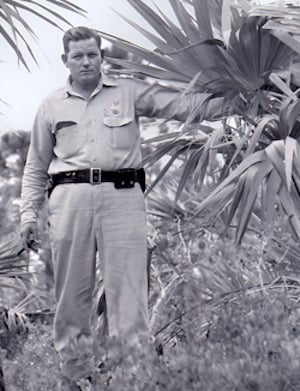 Jack Watson, the first refuge manager of the National Key Deer Refuge, was a vital force in saving the tiny deer that are indigenous to the Lower Florida Keys. (Photo courtesy of the Watson Family)

The deer have been protected for more than 60 years in their own serene world: the Florida Keys’ National Key Deer Refuge, known as an incredible environmental success story. But many people don’t know that one of the story’s main characters was a gun-toting lawman who loved Key deer.

Admittedly, it’s hard not to love the shy, winsome creatures. The smallest subspecies of the North American white-tailed deer, they’re found only in the Lower Florida Keys.

Male Key deer weigh approximately 90 to 100 pounds full-grown, and stand about the size of a large dog. Females are a little smaller, averaging 60 to 70 pounds full-grown. Male or female, they’re big-eyed, graceful and startlingly rare.

In the early 1900s, the miniature deer were a legitimate food source. By the 1930s, they’d been over-hunted to the point that extinction was a real threat. Although Florida outlawed hunting Key deer in 1939, poaching continued.

But the species got a second chance when the National Key Deer Refuge was established  in the Lower Keys in 1957, and Jack C. Watson became its first manager. Jack, by all accounts, wasn’t above using some pretty unorthodox tactics to thwart poachers targeting the deer under his protection. According to family members, if he ran across a poacher’s car in the refuge, he had no problem disabling it by putting a few bullet holes in the gas tank or the engine.

During his tenure as refuge manager, Jack Watson spread the word that he was a no-nonsense guy who would do whatever it took to protect the Key deer. His tough approach and unswerving dedication helped save the entire species.

For example, during a long-ago interview Jack’s son, Kip Watson, recalled a time when his father discovered people were hunting deer on Little Pine Island, which was reachable only by boat. He heard shots, found the poachers’ boat, and stationed himself nearby to catch them when they returned to it. 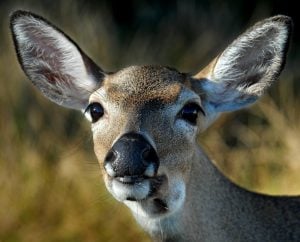 A Key deer eyes her surroundings on Big Pine Key. By protecting the deer and their habitat, the National Key Deer Refuge has brought the species back from near-extinction. (Photo by Andy Newman, Florida Keys News Bureau)

“They didn’t come back around as quick as he wanted them to, so he just set the boat on fire and said, ‘I’ll come back in the morning, and I’m sure they’ll be ready to talk to me by that time’,” Kip explained. “The next morning we went back out and they were sitting there trying to figure out how they were going to get back to the mainland — and he was happy to give them a ride.”

After many years of championing the Key deer, Jack Watson retired in the mid-1970s.

In 2017, the refuge celebrated its 60th birthday. Its population of Key deer has increased from 50 or fewer to a thriving herd of about 800. By protecting the deer and their habitat, the National Key Deer Refuge has brought them back from the brink of extinction.

Those who visit the tranquil preserve generally explore areas including a wildlife-rich freshwater quarry called the Blue Hole. Jack Watson has passed away (as has his son Kip), but his influence remains strong. Near a nature trail named for Jack, and throughout the refuge he helped protect, wander the thriving Key deer that are his living legacy.